What to Do After Replacing Mass Air Flow Sensor The mass airflow sensor, or MAF sensor, is a crucial component to ensure proper flow within a fuel injection system of a vehicle depends. If your engine is not running smoothly, before making things worse at this stage, you should replace the MAF sensor.

You must be aware of what to do after replacing the MAF sensor? Typically, you will be advised to let your engine run idle for about half an hour as an immediate step to take after replacing. Otherwise, you could let the engine system entirely reset by turning off the battery for 10-15 minutes.

There have been a number of cases where people had taken out the sensor only to find out the fault was somewhere else. This airflow sensor is often wrongly accused, and even if it is the component at fault, replacing it doesn’t automatically solve the issues.

This article will provide all the necessary information on how the MAF sensor works, affects the system, and what to do after replacing it!

How Does a MAF Sensor Work?

The mass airflow sensor sits between the air filter and the throttle, in order to detect how much air is flowing through the engine.

Even though they’re described as being airflow sensors, they also work for detecting fuel flow too. The MAF sensor collects relevant information to select the correct amount of fuel and then sends this information to the Engine Control Unit (ECU).

The ECU goes forth and provides the engine with the correct amount of fuel. If this very important MAF sensor fails to function as it should, you can imagine the issues that may be at hand.

Here’s an example of an OEM mass airflow sensor readily available on Amazon: 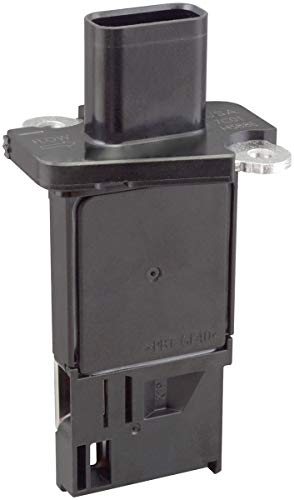 Read further to clarify when to replace, how-to, and what to do afterwards.

When Should You Replace The MAF Sensor?

Knowing when you need to replace the mass airflow sensor can be difficult. There are steps you can take to prevent this day from coming too soon. You will be able to extend the life of your MAF sensor by adopting an effective cleaning schedule.

However, if you begin to notice your car is having sporadic hiccups or chugs while it attempts to start, it may be time to give the airflow sensor a check and replace it with a new one if it seems to be at fault.

But, how will you know if the MAF is at fault? Let’s take a look at some possibilities:

The symptoms of a faulty MAF sensor to look for are mostly connected to how sufficiently the engine is functioning. The most common symptom of a faulty airflow system is facing a lot of difficulties starting the vehicle’s engine.

There are some signs you can keep in mind when using your vehicle to ensure you’re able to diagnose the problem:

As a user of your vehicle, you have the power to maintain the vehicle to help prolong its lifespan. For this reason, there tend to be numerous sensors under the hood of your vehicle to indicate problems. However, these sensors can become faulty due to a number of reasons.

A dirty filter is typically one of the main causes behind a failed MAF sensor as they accumulate the dirt entering the airflow sensor. Fuel leakage and contaminated systems will also play a pivotal role here. These issues will cause the sensor to not be able to detect the amount of air needed to flow.

If this occurs, the fuel and air co-dependence system will be at risk. The ignition chamber, along with other parts of the system, heavily depends on the correct flow and amount of air to work with the correct amount of fuel.

Therefore, a ratio between air and fuel flow must be maintained. If there’s too much fuel flowing but too little air or vice versa, your engine is likely to become damaged.

Note: before you replace the sensor, beware of false alarms and ensure you conduct a double-check…

If you were to have a faulty hose leak within the engine, can cause air to get into the engine abruptly, and the ECU might send a faulty MAF code then when it’s not at fault at all.

It’s important that before you take out the sensors to replace them with a new one, you must ensure if it’s a false alarm or not.

How to Replace a Mass Airflow Sensor

Before we delve into the method of how to replace a mass airflow sensor, let’s first specify the equipment needed and some pre-instalment tips!

You must make sure you always check the OE number of the old mass airflow sensor and compare it to the new one according to the reference numbers from the supplier and ensure they’re the same.

Clean the air hose and filter housing and change the air filter. You need to make sure that the connector that stays on top of the sensor has not corroded or shows any signs of corrosion and is clean.

How to Replace a Mass Airflow Sensor

If this job seems like more than you are willing to achieve, you will need a qualified technician to help you.

What to Do After Replacing MAF Sensor?

In general, the new sensor should be recognized by the motor. However, some problems are still possible to arise, which can all be avoided if you take some easy but necessary steps after replacing the MAF sensor.

Does a mass airflow sensor need to be programmed? Well, it’s strongly recommended that you disconnect the battery for around 10 to 15 minutes so that the engine or the vehicle computer gets sufficient time to forget the parameters it had previously learned and to adjust to the new setting.

When you connect the battery, it will begin to learn every bit of data regarding the newly introduced mass airflow sensor. When the battery is unhooked, it will not cause any problems.

It’s recommended to also run the engine idle for 20-30 minutes to avoid roughness when driving. It’s very common for a vehicle’s engine to not run smoothly just after the MAF sensor replacement. Hence, why road tests should be taken for the sensors and actuators to adjust effectively.

It’s common for a significant amount of car models to require their engine control module (ECM), or ECU (unit), to be reprogrammed after the MAF sensor is replaced. If you’re still witnessing issues such as hiccups and the engine getting super hot or not running as it should, then you must make sure that the problem is not elsewhere.

Note: Please ensure you take into consideration that other parts can cause similar symptoms and it might not have been (only) the airflow sensor that was broken.

What to do after installing new MAF?

After you install the new MAF, it is recommended to disconnect the battery for around 10 to 15 minutes so that the engine or the vehicle computer gets sufficient time to forget the parameters it had previously learned, and then to run the engine idle for 20-30 minutes to avoid roughness when driving.

How long does it take for mass air flow sensor to reset?

All MAF sensors will reset in 15 – 30 minutes when the battery is disconnected for.

Do you need to reset the ECU after replacing MAF sensor?

Not all makes and models of cars will need the ECU reset after replacing the MAF sensor, but the majority will.

Do you have to reset a mass air flow sensor?

Yes, disconnecting the battery for around 10 to 15 minutes is an important step to take after replacing the MAF sensor to ensure that the sensor resets. This way the computer will forget the parameters it had previously learned and adjust to the new settings.

Please leave a comment below if you have any questions about what to do after replacing mass airflow sensor!