How to Start an Automatic Car With a Dead Battery Without Another Car: 4 Methods 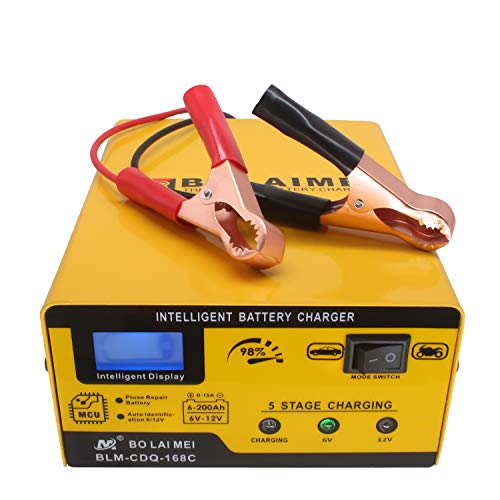 There’s not a lot worse than when your car stops in the middle of nowhere due to a dead battery and you don’t have another car or jump leads.

Sure, you may be able to call your friend for assistance if you’re not too far away or hope that someone drives past in due course. But, this isn’t always the case.

A dead battery is among the most frequent problems motorists usually experience with their cars. This often occurs when you try to start a vehicle after turning on its ignition but fails to respond—a clear indicator that the battery is faulty.

Other factors that can lead to a dead battery and make your vehicle difficult to start, include a shortage of gas, a malfunctioned fuel pump or starter, and broken cable connections.

On many such occasions, most drivers would jumpstart their car with somebody else’s car battery, and later find the nearest garage to get their battery checked.

But what would you do if there was no motorist around to help you jumpstart your car? You will need to know how to jumpstart a car without cables automatic. Here are a few methods:

Let’s take a look at each in more detail!

Push starting is a method we all know very well. It entails pulling or pushing a vehicle until it picks up enough momentum for the car to start. In bump starting, the car is made to move while the transmission is engaged to the engine to spin and start it

Though it is not generally recommended for automatic car owners to try this method, because it’s hard to determine how fast a car can go, and this can also, rarely might I add, end up causing car brake problems.

However, as this is the simplest method, you can always try the push starting technique on level ground.

Within no time, your vehicle’s battery should be fully charged and ready for you to continue your journey to your destination.

Jump starting a car without another car through a battery pack (portable jump starter) is an easy, fast, and reliable method how to recharge a car battery without jumper cables. All you need is a portable jump starter kit which I advise purchasing and leaving in your car at all times.

A portable jump starter, also referred to as a battery booster pack, an emergency booster, a battery jumper, or a jump box, is a compact portable battery that provides the necessary 12 volts back up power to boost the car’s dead battery for jump-starting when your battery is dead.

These kits can be safely used to jump-start a manual and automatic transmission car by yourself without needing another car’s or anyone’s help.

There are various types of portable jump starters available. Lead-acid and lithium-ion are the two most common types of jump starters with the former being very heavy and bigger but, capable of starting the car a few times before goes down.

Here’s an example of a Lead-acid battery charger available on Amazon:

Conversely, the newer lithium jump starter is made up of lithium-ion or lithium-polymer and is a pocket-size small, and light jump starter that can provide up to more than ten starts when fully charged! 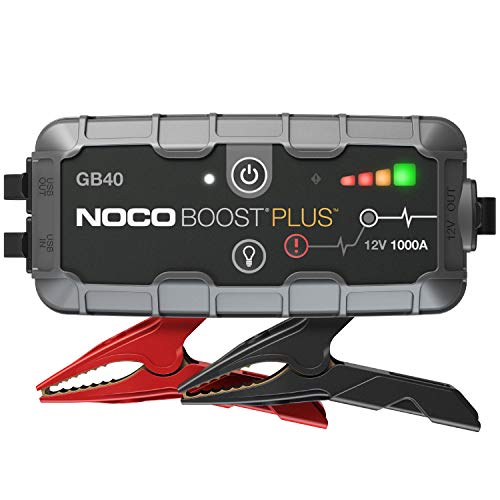 This portable jump starter comes with many additional features such as an emergency light, a USB charger for charging cell phones and tablets, sometimes radios, and even a built-in compressor to allow you to fill your car’s tire in an emergency. The lithium-ion jump starter is rechargeable and can be plugged into a household outlet.

First of all, open the hood, locate the battery and remove the terminal covers from the battery. You will now be able to identify the negative and positive posts of the battery.

Of course, do not smoke near the battery and make sure the car is away from flammable material. Keep any dangling clothes, jewellery, and your face away from the battery.

The next step in the process is to make the connections. Start by putting the positive (red) lead on the battery’s positive post and the negative (black) lead on an unpainted clean car frame or engine block (not a moving part).

Now make sure the jump starter leads are firmly connected before turning on the jump starter. You can, of course, connect the jump starter negative lead to the car’s dead battery negative terminal as most people do, but some engineers recommend against it, as the chances are it could spark and cause a fire.

Now it’s time to crank the ignition for a short time to get the engine running. It should start on the first attempt but if it doesn’t start, then wait for a few minutes before trying again to allow the battery time.

It’s important to understand that the portable jump starter does not charge your car’s battery, but instead, it provides the necessary amperage to the starter motor to crank the engine and get it going.

When on this step, you do not need to crank the engine for an extended period of time. If you did, this could damage the starter motor and also rapidly discharge the portable jump starter, potentially leaving you in a sticky situation.

After the engine starts up, you can turn off and remove the jump starter. I’d recommend allowing the car to run for say 15-20 minutes so that it can charge the battery.

You should always remove the jump starter leads in reverse order, the way it was connected. First, the black negative lead should be removed, and then the red positive lead. At the next opportunity, you should recharge the jump starter for 3-4 hours in preparation for the next usage, if there is one.

Here’s a great YouTube demonstration on how to jump start your car with portable jump starter:

Tipping the Battery Upside Down

If you don’t have the jump leads or another car, don’t worry. Here is another quick method on how to charge a dead car battery without jumper cables. In this how to jumpstart a car without cables automatic method, a boost battery is tipped upside down to a dead battery to start the car.

All you need is a powerful spare battery. It’s advised to use a maintenance-free and spill-free battery with a crack-free casing because the battery will be flipped upside down, so the liquid inside the battery could spill out.

First of all, turn the ignition switch to an open position and turn off all the accessories such as radio, roof light, headlights, etc.

2. Tip the Battery Upside Down

Now you can turn the ignition key to the start position and hopefully he car will start. You can then remove the boost battery from the car and allow the car to run for 15-20 minutes to charge its dead battery.

As already mentioned, if using a lead-acid battery and it is turned upside down, the chance is that you will spill out the acid from the battery, which can cause chemical harm to you as well as potentially causing damage to parts of the car.

If you do not have a maintenance-free and spill-free battery to flip upside down, then this method is recommended so that you can use the normal lead-acid battery to bridge with a dead battery by using tools such as a spanner.

The best method for jump-starting a lead-acid battery is by putting it side by side with a dead battery, using tools to bridge the gap between the dead and the booster battery.

The first step is to ensure your car is pulled over in a safe area. Ensure the car ignition is turned off before opening the hood. Place the booster battery to the side of the car’s dead battery.

It’s crucial that you do not hold the spanner firmly to both batteries as it will get very hot. A poor holding of the spanner is likely to ignite the gasses produced by the battery which is very dangerous.

Now you can turn the ignition key to the start position, and hopefully, the car will start. Let the car run for 15 to 20 minutes to charge the dead battery and you should be good to go.

Here’s a useful YouTube demonstration on using spanners to jump start a car:

You should take great caution every time you’re working with your car no matter what maintenance you’re doing. Any jumpstart battery must have essential safety features to ensure a person can easily fix it in the right terminal without putting themselves in danger.

It’s imperative that you keep your jump-start battery in good condition. You should be focused when jump-starting your car to ensure you don’t connect the jumper links to the wrong terminal, as this can result in a short burst and damage the battery.

In addition to this, every time you’re about to jumpstart an automatic vehicle, you need to make sure the gear is in “neutral” mode before restarting the car. Otherwise, the car might start at high speed and end up causing substantial damage.

How do you jump start an automatic car without another car?

How do you push start an automatic car with a dead battery?

Though it’s not recommended to push-start an automatic car, you can do so by setting the start key to on position and finding somebody to push the vehicle from behind until it gathers enough speed. As the car is in motion, and the car’s speed is stable, fire its ignition, with the car in “drive” and keep working on the gas in small gentle steps.

How can I charge my dead car battery without another car?

The best way to charge your dead car battery without another car is by using a portable jump-starting kit. The lithium-ion portable jump starters are almost pocket size and carry enough voltage to kick start your car to then allow the battery to charge.